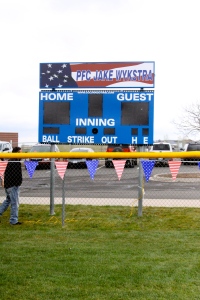 Wow, Today was an incredible day. The only thing missing was you. One of the baseball fields you played on your entire childhood was dedicated and named after you! Although the rain threatened our event, the weather held out long enough! All the teams attended in uniform. The honor guard was there from the Thornton Police Department. Some were the same men who performed the flag ceremony when your casket was flown from Dover, Delaware to Arvada, Colorado. I thanked them. There was a balloon release for you. The balloons were red, white and blue, and many of the players tied small American flags to the strings. Many wrote words of thanks on their before sending their balloons up to you! 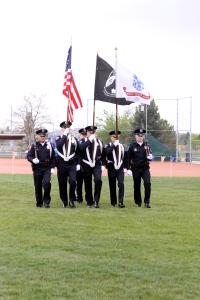 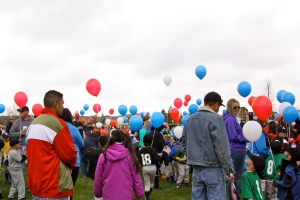 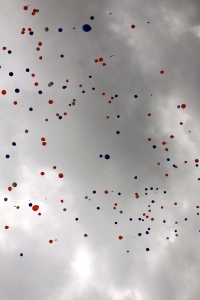 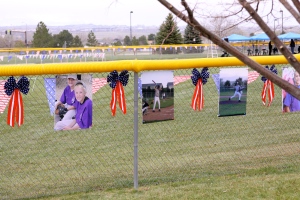 Here are the words that were spoken by the Little League President:

Jake was born 07/14/1992 in Louisville, CO.  He was raised in Thornton, CO attended Eagle View elementary, Rocky Top middle school and graduated from Horizon, High school in May, 2011.  He attended Front Range Community College in 2011 and 2012.

Jake’s first love with sports was always baseball.  He loved it as a little league player, and a fan.  He played baseball his entire childhood.

As a young teenager, Jake believed his calling someday was to serve his country, and in May, 2013, he realized that goal by joining the US Army.   He attended basic training at Fort Benning, GA, and graduated as a proud infantryman in August, 2013, where he was assigned to the 4th Infantry Division at Ft. Carson, CO.   1st Battalion, 12th Infantry, Alpha Company.

Because he showed a high level of proficiency and skill as a soldier, Jake was chosen to be one of a select few to join an Arial Reactionary Force to fly on Blackhawks supporting combat missions in Afghanistan.  In January, 2013, Jake’s Alpha company was deployed to the Zabul province in Afghanistan, where they joined the “Red Warriors” task force operating out of Forward Operating Base Apache.  Since that time, Jake was dispatched on countless chase missions and support operations assisting both NATO forces and Afghan National Security troops in contact engagements and medical emergencies.

On May 28, 2014, Jake was dispatched on a medi-evac rescue mission with his squad-mates, and made the ultimate sacrifice, giving his life when his helicopter crashed.  We grieve his loss and thank Jacob for his service and sacrifice.

“Never one to complain, Jake’s smile and presence kept his squad and platoon’s moral high. Also a prankster and practical joker by nature, his sense of humor enabled others to laugh at him, and in turn laugh at themselves in tense and anxious moments. This soldier seemed to defeat fear with his mere presence. A rarity for someone so junior in rank, but very senior in heart and courage.  PFC Wykstra was a great soldier, but he was an even better human being. I hold him in the highest regard as a professional soldier, and a person. His service to this nation – exemplary. His training proficiency and aptitude – the top 1%. His potential for future responsibility and leadership – without bounds. His notoriety, attitude, and laughter among his peers – infectious. His squad mates loved him – and he them. GK Chesterson’s quotation best represents Jake when he said, “The true soldier fights not because he hates what’s in front of him, but because he loves what is behind him”.

His family thanks you for your support and asks that we remember and pray for all our troops and their families as they give selflessly to our country and to others across this globe, in support of freedom.” 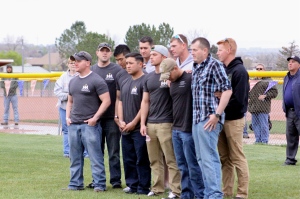 The guys from your platoon were there. We spent the entire day together at your sister’s house. I kept thinking, “Jake should be here”. I think you were. Although it was difficult to speak in front of this crowd, I managed to do it without crying. I did choke up for a moment, but I stayed strong for you! These are my words:

“I want to introduce the wonderful men who were deployed with Jake. These men were his brothers in Afghanistan, they were with him when he was killed, many were wounded and many worked to recover Jake’s body so that he could be returned home to us. Please join us in thanking them for their courage and willingness to serve our great nation, allowing us our freedom… And we, Jake’s family thank you for the love and friendship you showed him. We love you and will always keep a special place in our hearts and prayers for each one of you.

Jake was a great son, husband, brother and friend to many. He loved his family and friends and he had so many friends in his 21 years of life! He was a prankster and had an awesome sense of humor. He loved nothing more than to make people laugh and to raise the spirits of those around him. He was one of those who lived each day to the fullest.

Jake could light up a room with his bright blue eyes and his contagious smile. His fellow squad mates have said that even in stressful situations, his strong faith, his smile and sense of humor could steady them and keep morale high. Jake’s personality was huge and his talents were diverse. He was an accomplished artist who loved to sketch and paint. He enjoyed skateboarding, snowboarding, football, rugby and playing his guitar, BUT most of all, “baseball was life!”

It was a bit nerve racking, but I managed to speak as well, and did so without crying. I hope you knew how hard it was, and I hope you were proud of me because I sure am proud of you! This is what I said:

“Jake started playing for NLL when he was five years old and continued to play here at these very fields until he played his freshman year at Horizon High School. (If you haven’t seen his photos along the fence line, I encourage you to see them on the way out). This organization and the time Jake spent on these fields greatly influenced his life. He made friends here, he learned to accept the wisdom of his coaches, even the rare times when he didn’t agree. He learned about winning and losing and that life isn’t always fair. He learned to work hard to improve himself, to compete and most of all, he learned to have fun! We are so grateful for this organization and the opportunity it gave Jake to learn to fall in love with the great American past time.

As parents, we all use bribery to some extent. It’s no secret that schoolwork wasn’t Jake’s favorite thing, especially homework, but if I promised a game of catch after homework, it usually got done. As he got older he often worried that his throwing would hurt my hands, but I happily endured it, because of the fun we had. Jake’s dad spent hours with him, working on his batting and pitching. These special memories will forever be engraved in our hearts because of the joy this sport brought to our precious son. For us, Jake and baseball are synonymous.

We rarely received phone calls from Afghanistan, so when we actually got to hear Jake’s voice, we were thrilled. I especially remember the time he called with a bit more excitement than usual. He said, “Hey Mom, we have baseball gloves!” We talked for a bit about who he played catch with and so on, but one part of the conversation especially touched my heart. He said, “When I’m throwing the ball, I feel like I’m back home again. For a short time, it makes me forget about this war.” It seems baseball was a “happy place” for Jake, no matter where he was and for this we are grateful.

We want to thank the NLL, the many coaches and fellow players who, over the years influenced Jake’s love for baseball. Thank you all for coming to honor our boy, right here at the home town fields he loved so much!”

It was a busy day with lots of laughter, a few tears but mostly smiles! The next day, after church I felt compelled to go back to the field on my own. I sat in your bleachers, as a team practiced on your field. The sights, sounds and smells were all so familiar. I felt as if you were there with me. I think this truly is your place. I can’t wait to go back next month and watch a game on your very own field!

I miss you, Buddy. More than you can imagine, but I am trying to do the things that are right so I can be with you again. I love you, Jake.

Here is the link to the news report (the first and 3rd pictures aren’t even you, but they are other fallen soldiers, so we will welcome them to your news story!)